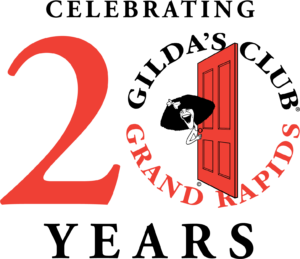 Founded with love by cancer survivors, we officially opened the doors of Gilda’s Club Grand Rapids on February 15, 2001. However, the grassroots movement to bring a Gilda’s Club to our community began in the spring of 1996 by local philanthropist Twink Frey.  As a cancer survivor, she knew personally the lack of social and emotional support resources available to her when she was going through her diagnosis, treatment and life altering “after effects.”  She was joined by two other local cancer survivors – Deb Bailey and Susan Smith – and together, these three women set about the task of founding Gilda’s Club Grand Rapids.

In 2008, after numerous impassioned pleas and requests from families and the local medical community – and two years of our own community research which showed a significant gap of service in the community – Gilda’s Club evolved our program to include children and their families grieving a death due to any cause. We secured a network of 100 referral organizations and funding for a three year Children’s Grief Pilot Program to see if our emotional health support program was effective for other life circumstances beyond those related to cancer.

It was quickly obvious that the pilot program was wildly successful and Gilda’s Club Grand Rapids officially expanded our mission to include grief support due to any cause for all ages in 2009.

Gilda’s Club Grand Rapids was inspired by Gilda Radner. Gilda Radner was one of the great comic geniuses of the 20th century, ranked alongside Lucille Ball and other comedy legends of the highest caliber. Born on June 28, 1946 in Detroit, Michigan, Gilda Radner is best known as one of the original cast members of Saturday Night Live, where she won an Emmy Award for her work in 1978.

Gilda Radner was born to make people laugh.  As one of the “Not Ready for Prime Time Players” SNL original cast members, Gilda charmed us with characters like Rosanne Rosanneadanna, Baba WaWa, Emily Litella, and sniffly-nosed Lisa Loopner who always got an affectionate “Noogie” from co-star Bill Murray.  We remember her for the phrases she created with writer Alan Zweibel, such as “Never mind!” and “It’s always something.”

Her legacy is the range of her comedic characters, her films with her husband, Gene Wilder, and her work on Broadway, including Gilda Radner: Live from New York.  But she played another role, a part she called “The Invisible Cancer Woman” in the saga of “The Adventures of the Independent Bald-headed Chemo Patient.”

In October of 1986, Gilda was diagnosed with Ovarian Cancer. During the course of her treatment, Joanna Bull, Gilda’s cancer psychotherapist, introduced her to cancer support groups. Recognizing how integral the support experience was to her treatment, Gilda’s dream was to develop a community where anyone with cancer would receive the kind of support she had found. In her best-selling book, It’s Always Something, Gilda wrote about her experience living with cancer. She spoke of establishing such a support community when she felt better and said, “There should be a thousand of them.”

Gilda’s ovarian cancer was diagnosed too late for effective treatment and she died in 1989. Following her death, Gilda’s husband, actor and comedian Gene Wilder, Joanna Bull and many of Gilda’s friends founded the first Gilda’s Club in her memory in New York City.

Gilda’s Club Grand Rapids’ co-founder Twink Frey saw a story about its opening on the Today Show, which inspired her to begin efforts to bring Gilda’s Club to Grand Rapids.

CSC’s mission is to ensure that all people impacted by cancer are empowered by knowledge, strengthened by action and sustained by community. CSC also helps establish best of class cancer care standards that are evidence based with research that further supports the importance of emotional health support for anyone on a cancer journey or supporting someone with cancer.